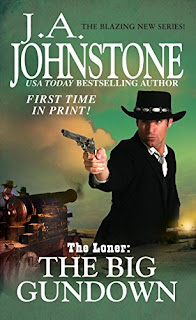 Conrad Browning is not known to be alive by many, in fact, many think he is dead.  Conrad goes by the moniker of Kid Morgan and his draw is fast.  Conrad learns later in life that his biological father is none other than Frank Morgan, the last gunfighter.  The Kid’s past is littered with grief and battles while his body has the scars to prove how often he steps into trouble to help others out.

The Kid drifts wherever the wind blows and on this day he shows up at a secluded ranch as outlaws are attempting to bring a family trouble.  When Kid steps in, he gets wounded; yet, in time, with the care of the family he heals and heads off for a new horizon.  He isn’t far from the ranch when he hears gunfire and races back to bring help to the family.  When he leaves the ranch again, it is with one thing on his mind…vengeance to those who wiped out the family.

The Kid heads toward a town called Bisbee.  Once again, it doesn’t take long for trouble to find him.  After dispatching two desperadoes, the Kid is offered a job by a railroad tycoon to help keep his ore shipments from being stolen.  On top of already wanting to locate the villains who wiped out the family he had grown to care about, he is wanted not only by the railroad tycoon, but by his wife and then by the very man Kid is wanting to exact revenge on.  When Kid Morgan decides how to extract himself from the plethora of trouble, it will come from an unexpected character in the story!

The suspense builds throughout the novel with an ending that is surprising and has me looking forward to reading the next installment in The Loner series titled, Rattlesnake Valley.  Read The Loner series and enjoy the character of Conrad Browning.  Don’t miss the series that centers around his father Frank Morgan titled The Last Gunfighter!  Read Hard.  Love Free.