The Kingdom by Brian Litfin 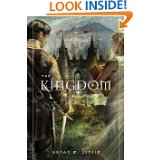 Title:  The Kingdom
Author:  Bryan M. Litfin
Year:  2012
Pages:  444
Publisher:  Crossway
Note:  I received a complimentary copy for this honest review.  Other reviews can be located or requested at http://seekingwithallyurheart.blogspot.com/
The year is 2042, and the known world has ended in what has been called The Great War of Destruction.  It started with chemical warfare that decimated populations along with technology.  When the dust settles, one man urges alliances with the main goal of eradicating Christianity.  This is very successful for a time, but after about 300 years has fallen by the wayside.  As this story begins, there are no sophisticated urban cities.  Travel is by ship or boat, horse or by walking.  There are no computers, cell phones or internet.  News is spread by mouth or carrier pigeon.
The two main characters are Teofil and Anastasia or Teo and Ana as most call them.  They are both new Christians or Chistiani and engaged to be married.  They have been banished from their homeland, Chiveis.  If they return, they will be executed.  The High Priestess of Chiveis is in league with Astrebril, a.k.a. Satan.  She wants to expand her power by taking over other countries so she re-establishes the alliance from 300 years ago.  There are various other bad guys in this story like The Iron Shield with his force of assassins the Exterminati, and the Clan, which is like our modern day mob.
Teo is asked by the Papa or Pope to go on a mission that will take from the fall through the winter, leaving Ana behind at the convent where she lives with the sisters.  Both face great opposition while apart.  Ana’s best friend, Vanita, is staying with her.  Vanita’s heart belongs to Marco, the pirate captain of a ship that Teo travels on for his mission.  Marco has seen God at work in Teo’s life, but has yet to surrender to His will.  Does Marco ever give his heart to the Lord?  Will Teo ever return from his mission to his beloved Ana or will the forces of evil keep them apart?
This is the third book in a trilogy.  The first book is titled The Sword and the second book is titled The Gift.  In the first two books, the Old and New Testaments are rediscovered by Teo and Ana.  However, the books are separate.  The Old Testament gets distributed, but most people don’t yet know the Good News of the New Testament.  Still the number of believers grows.  Teo and Ana are not afraid to speak of their belief in Christ wherever they go to spread the message of the New Testament.  Teo and Ana face life and death events to bring Christianity to the public’s knowledge.  How about you?  Are you willing to stand up for Christ?  This third book has the Testaments combined in one book.  More opposition is faced by believers.  There is great action, adventure and some romance too.  This is a really good book that will entertain men and women.  Get your copy today!
My rating for this book is four stars.