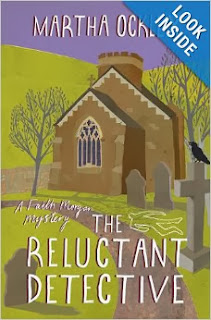 Title:  The Reluctant Detective (A Faith Morgan Mystery)
Author:  Martha Ockley
Pages:  224
Year:  2010
Publisher:  Monarch Books
Faith Morgan is a fairly newly ordained vicar and is visiting different parishes to see where she might take a job.  During her visit to Little Worthy, close to where Faith grew up, she is attending the local church service when the vicar is murdered while taking communion.  Faith, with her police background, quickly involves herself in the investigation.  Her ex-boyfriend, Ben Shorter, is in charge of the case and while there is occasional antagonism, they get on for the most part.  Faith is soon asked to stay in Little Worthy to take the dead vicar’s place on a temporary basis.  Through her investigations, Faith begins to get to know various members of her congregation.
As the search for the killer moves forward, another death is discovered just two days later.  What is going on in this little sleepy community?  Faith sees the dark side of human beings, but this time she is seeing it with spiritual eyes.  She sometimes questions if she made the correct decision to enter the ministry.  She receives quick confirmation that she did indeed make the right choice in serving God through church ministry.  Who could hate a vicar enough to poison him while taking communion?  As she looks at each church member, she can’t imagine any one of them being the guilty party.  She thinks she is a good judge of character, but maybe she isn’t if one of these people is a murderer.
Here are some of the things I didn’t like about the story:  1) Faith Morgan is a vicar, a religious leader in the community, but she curses (one time) in front of a church member?  She also is never shown reading her Bible or consulting Scripture for guidance.  2) She is shown drinking alcohol on more than one occasion.  I realize this might be a cultural difference, but it still bothered me.  3)  The attitude of most everyone in the story that it is okay to have a sexual relationship outside of marriage and Faith seems to share this belief as she had one herself before deciding to leave the police force and become a minister.  This is marketed as Christian fiction and not because the main character is in the ministry!  Now, here are some things I did like:  1) The mystery aspect of the story was intriguing and held my interest.  2) Faith jumps right into her role as temporary vicar, which I thought was very courageous. 3) I liked the fact that Faith had been on the police force before becoming a vicar.  I must give the low rating though because of the above mentioned reasons in the “things I didn’t like” section.  I will be reading the next story in this series, The Advent of Murder, and I hope that these issues will be resolved.
My rating is 2 stars.
Note:  I received a complimentary copy for an honest review of this book.  The opinions shared in this review are solely my responsibility.  Other reviews can be read at http://seekingwithallyurheart.blogspot.com/ .  Also follow me on Twitter @lcjohnson1988, FaceBook at https://www.facebook.com/lisa.johnson.75457
at December 10, 2013