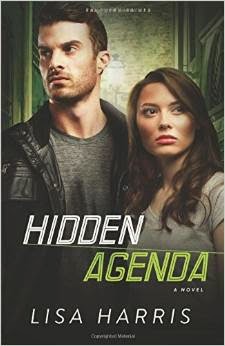 Title:  Hidden Agenda (Southern Crimes #3)
Author:  Lisa Harris
Pages:  304
Year:  2015
Publisher:  Revell
This third and final chapter in the Southern Crimes Series tells readers Michael’s story.  It is still set in Atlanta mostly, and characters from the prior two books in the series make appearances in this story as well.
Olivia Hamilton and her brother Ivan have always thought their father a mystery.  Now, with Christmas around the corner, they have made their annual trip to his small island off the Georgia coast.  They have known their father was a rich real estate mogul, but what they soon discover is that he is much more than they could have ever imagined.  Someone has been sending Olivia, who is a reporter, text messages about secret dealings her father has been involved with as part of a drug cartel.  Can these messages really be true?  Ivan discovers a man being held captive on the island.  Ivan and Olivia must decide if they should rescue this man or not.  He could be on the island to hurt their father, but maybe he is on the island to be hurt by their father.
Michael Hunt has been working undercover for the last eight months and is about to come in with evidence to end his case and allow him to return home.  His family has believed him to be dead during this time.  He has missed them so much, but this case will bring down so many criminals and save many lives.  He prays for God’s guidance and help when he is put in extreme danger.  He then faces four days of running for his life, not knowing who he can trust and having other lives depend upon his decisions.
There is plenty of action and tension in this story to keep any reader glued to the pages.  The romance element in this particular book fell flat for me, but it didn’t detract from the suspense of this well-written novel.  My favorite book in the series is book two, but this one is a worthy effort to wrap up the series.  I am anxiously waiting for the next series or novel put forth by this talented author.
My rating is 4 stars.


Note:  I received a complimentary copy for an honest review of this book.  The opinions shared in this review are solely my responsibility.  Other reviews can be read at http://seekingwithallyurheart.blogspot.com/.  Also follow me on Twitter @lcjohnson1988, FaceBook at https://www.facebook.com/lisa.johnson.75457
at January 22, 2015