The Spider and the Sparrow 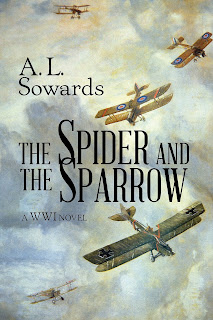 Title:  The Spider and the Sparrow
Author:  A. L. Sowards
Pages:  341
Year:  2016
Publisher:  Covenant Communications Inc.
My rating is 5 stars.
This author pens a wonderful intriguing tale involving spies, intelligence passing between parties from different nationalities and tension with each page.  I loved how various characters were crafted in a way readers knew whose side they were on while others were harder to know their stance.  There was authenticity in the novel shown not just in the war sequences, but also in how families suffered and how dependent the women were on men to care for them.
There were British, French and some German characters who profited from the war and others who paid a horrible price.  There was a spy whose code name was “spider” and he went into enemy territory in hopes of learning what the enemy was developing in artillery or gas bombs.  The “sparrow” was a girl who was helped to get away from a half-brother who beat her for the fun of it.  When a soldier saw her plight, he gave her train fare to leave and go somewhere to start a new life.
In the book, the scenes are described so well I felt myself being pulled into the moment whether it was when a mother was caring for a sick child or a soldier was coming out of the trench.  The novel reminded me of how airplanes were different then.  I cannot imagine the loss of life as no parachutes were given to pilots when going into action.  The material that was used to craft airplanes made it easy for them to be shot down from another plane or from the ground.
There is romance in the book too.  I enjoyed the portrayal of how women who married or were married to soldiers reminded them of life.  The main two females from different backgrounds were Claire and Evette and the friendship they formed was not unusual for the time.  Even though their social standing was from polar opposites, it was the desires of the heart that brought them together as they saw how each desired some fulfillment of happiness when the ugliness of war was over.
The last item I will share that I thought was well-crafted in the story was the themes of courage and bravery.  The fictional tale depicts how men who might have had a fractured belief in prayer or a God who loves them and listens actually exists and how God did at times answer prayer in ways one expected and in other ways differently.  The Spider and the Sparrow is a good, clean read about WWI that I encourage historical readers to enjoy!


Disclosure of Material Connection:  I received one or more of the products or services mentioned above for free in the hope that I would mention it on my blog.  Regardless, I only recommend products or services I use personally and believe will be good for my readers.  I am disclosing this in accordance with the Federal Trade Commission’s 16 CFR, Part 255. “Guides Concerning the Use of Endorsements and Testimonials in Advertising.”