A Primary Decision (The Worthington Destiny #3) 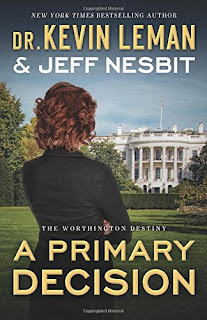 Title:  A Primary Decision (The Worthington Destiny #3)
Author:  Dr. Keven Leman & Jeff Nesbit
Pages:  343
Year:  2016
Publisher:  Revell
My rating is 4 out of 5 stars.
This third and final book in the series focuses on Sarah Worthington, although big brothers Will and Sean are definitely a part of her story.  Out of the blue, Sarah is nominated by the President of the United States for the position of Attorney General.  Sarah accepts the nomination and begins the vetting process.  She hopes the pictures of her brother, Sean with the Polar Bear Bomber don’t make it into the hands of the press.  The rest of her family is keeping another secret from her as well as everyone else and likewise doesn’t want the media to find out about it.  Sarah continues to dig up facts and investigate the Polar Bear Bombing case even though the police have put the case to bed.  Sarah knows there is more going on beneath the surface.  Her friends Darcy and Jon continue to help her.  If she is elected Attorney General, she must give up her investigation.
She is elected, but shortly thereafter proof of the involvement in the bombing case of a high level official at her brother’s company as well as a close confidant of the President of the United States is discovered.  Sarah resigns her position as Attorney General, but surprises everyone with her announcement that she is throwing her hat in the ring to run for President of the United States.  With secrets still hidden and family members deciding how to come to terms with an event in the past, can Sarah’s bid for the highest office in the land be successful or will secrets from the past come to light and ruin her chance?
If you like political intrigue, drama and suspense, then this is a series you won’t want to miss.  The three books should be read in order:  A Perfect Ambition, A Powerful Secret, and then A Primary Decision. The juggling act and stress each sibling had to experience in each of the three books was impressive.  The amount of pressure they each experienced was almost tangible and I caught myself wondering how I would handle the various situations each one encountered.  One aspect I would have liked to have seen more of was the faith in God to have played a larger role in the books.  I did enjoy these entertaining books and look forward to more from this author team in the future.


Disclosure of Material Connection:  I received one or more of the products or services mentioned above for free in the hope that I would mention it on my blog.  Regardless, I only recommend products or services I use personally and believe will be good for my readers.  I am disclosing this in accordance with the Federal Trade Commission’s 16 CFR, Part 255. “Guides Concerning the Use of Endorsements and Testimonials in Advertising.”
at December 05, 2016