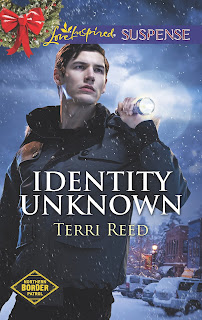 Title:  Identity Unknown (Northern Border Patrol #5)
Author:  Terri Reed
Pages:  220
Year:  2016
Publisher:  Love Inspired
My rating is 4 stars.
Nathaniel Longhorn wakes up in a strange place with no memory of who he is now or who he was in the past.  He is in the hospital and a pretty deputy sheriff, Audrey Martin, is responsible for that.  She found him washed up on the Maine shoreline, unconscious and about to be thrown back in by an unknown assailant.  She rescues Nathaniel and gets him safely to the hospital, but not for long.  Attempts continue to confront her and Nathaniel.  The two of them click right off the bat and Audrey refuses to leave his side until he regains his memory.
Nathaniel struggles with not knowing his past as he can’t plan for the future without knowing what kind of man he was.  Was he a criminal?  He was dressed all in black tactical gear with no identification when he was found.  His picture is sent to Canada, which is across the bay from Maine and Nathaniel is soon identified.  Now he at least knows his name, but he still can’t remember anything from his past.  As the attempts on his life increase, he visits places from his past in hopes that his memory will return.  As Audrey learns more about Nathaniel, she knows he is a good man and she constantly encourages him and supports him.


There are some good action scenes and lots of tension.  I liked the strong female character of Audrey Martin and her wanting a man to like her as she is, not who he thinks she should be.  I also liked how Nathaniel asked her to pray for him, even not knowing his past or what his beliefs were.  He instinctively turned to prayer.  These Love Inspired books are a great way to spend a rainy afternoon!
at December 17, 2016