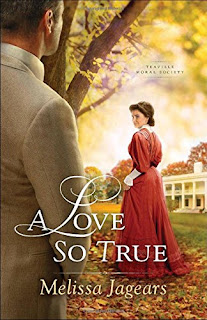 
David Kingsman is in town at his father’s request to get the local glass factory ready to sell.  His father is a domineering, harsh, critical businessman, but he depends on his only son David to take care of the books and add a touch of humanity that his father lacks.  David begins to see why the factory was losing money and thinks he can turn it around to make it profitable.  His father is adamant that the factory be sold.  David has never been able to stand up against his father for long, but he has developed an attachment to Teaville, its people and one in particular, Miss Evelyn Wisely.  She is keeping herself at a distance from him, but he has begun to see the real woman in brief glimpses and likes what he sees.


Evelyn Wisely is the only daughter of an older pastor and his wife.  The three of them oversee the town’s orphanage, which is the only thing Evelyn has wanted to do.  She now has a dream of starting a home where prostitutes can go if they want to leave their profession.  They will be provided with knowledge of a new skill where they can get legitimate work.  She must obtain the support of local businessmen to make a go of the project and David is the perfect person to help her.  He arrives at the orphanage often on some pretense, but she is more and more looking forward to seeing him each time.  However, she knows they must remain friends because she has a secret no one knows about, one that would change everyone’s opinion of her if discovered.  The only thing is she forgot to tell her heart that.


There were several things I liked about this story that showcased Evelyn’s selfless love for what society at the time considered throwaway people, her dedication and devotion to the prostitutes and their children and trying to spread God’s love and his gospel message to them.  She wasn’t preaching to them, but showing them Christ’s love with her actions.  She fed them when they were hungry, gave them something to drink when they were thirsty and treated them when they were sick.  David’s patience and willingness to go outside his comfort zone to try new things was a joy to read.  His thinking of others before himself was good to see from one who had so much wealth.  The story was a little slow in some parts, but overall was well worth reading and I look forward to another book in the series soon I hope!


Disclosure of Material Connection:  I received one or more of the products or services mentioned above for free in the hope that I would mention it on my blog.  Regardless, I only recommend products or services I use personally and believe will be good for my readers.  I am disclosing this in accordance with the Federal Trade Commission’s 16 CFR, Part 255. “Guides Concerning the Use of Endorsements and Testimonials in Advertising.”
at May 31, 2017