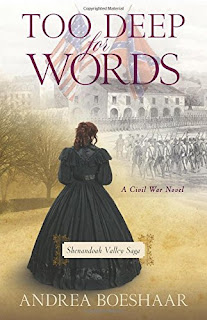 
This second book of the Shenandoah Valley Saga begins right where book one, A Thousand Shall Fall, leaves off.  It is the fall of 1864 and the Civil War is entering its waning months.  Carrie Ann Collier has been married all of 19 days when her husband, Peyton, is called to calm what he thinks is just a minor skirmish a short distance away.  What the Union Army doesn’t know is that this will become more than a minor skirmish and Peyton doesn’t return home in time for breakfast as he promised Carrie.  In fact, he doesn’t return at all.  General Sheridan personally arrives to bring the news to Carrie that Peyton is missing and presumed dead.  Carrie refuses to believe he is dead, but all those around her except her sister Margaret assure her there is no way he could have survived the bomb blast.


For a few months Carrie searches every hospital she can or asking other wounded soldiers for information on where wounded soldiers from Peyton’s particular battle might have been taken for care.  She learns that he might have been taken prisoner and therefore might be in a Confederate hospital.  She and her sister travel to Richmond, Virginia, which is still a part of the Confederacy even though they are both considered members of the Union.  During this dangerous time in the South where they could be imprisoned or even executed as spies, they run into Confederate Colonel Elijah Kent, Peyton’s best friend and the person Peyton put in charge of his estate should Peyton fall in battle.  Elijah has promised Peyton he will look after Carrie and her household, but he has been in love with Carrie from the moment he saw her.  Now that she is for all intent and purpose a widow, can he pursue a romantic relationship with her?


Andrea Boeshaar has the talent to get me involved in her stories from page one in this series.  I thoroughly enjoyed this story and can’t wait for her next book!  The emotions of the characters just leapt off the pages, and I could easily relate to what they were feeling.  This is one of my favorite time periods to read about and found the details of the time interesting.  The story moved at a good pace with no slow spots for me.  There are some tense moments in the story too, which added to the depth of the story.  This is one you don’t want to miss!


Disclosure of Material Connection:  I received one or more of the products or services mentioned above for free in the hope that I would mention it on my blog.  Regardless, I only recommend products or services I use personally and believe will be good for my readers.  I am disclosing this in accordance with the Federal Trade Commission’s 16 CFR, Part 255. “Guides Concerning the Use of Endorsements and Testimonials in Advertising.”
at May 08, 2017