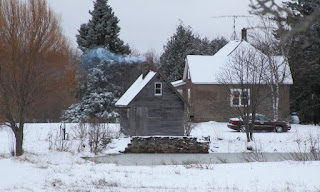 
A snow day on April 27! As I write this, my kids are home from school. Such is the life on Copper Island, which averages over 200 inches of snow annually.


My eleven-year-old daughter was indignant when she read the poem A Calendar, by Sara Coleridge. “April brings the primrose sweet, Scatters daisies at our feet.”


“This was not written by a Yooper,” my daughter said, referring to the residents of the Upper Peninsula of Michigan.


Copper Island is on the northern tip of the Keweenaw Peninsula, which juts into Lake Superior. Snow begins to fall as early as October and runs through May. In the winter of 78/79, it snowed in every month except August, accumulating 359 inches. That is not a typo. It’s nearly 30 feet of snow.


A local university, Michigan Tech, is the snowiest campus in the United States, with nearly twice the annual snowfall as the runner-up. However, our twin towns, Houghton and Hancock, are not listed among the nation’s snowiest cities, because they are too small.


I grew up in an old farmhouse on the island, and then I left for the big city after graduating from high school. And like many, I returned. The Keweenaw often draws people home, and it attracts new residents who want to be connected to nature and the community.


The Copper Country offers a strange mix of remoteness and accessibility. Education and low salaries. Harsh climate and year-around outdoor recreation.
One city on the north side of the island has the distinction of being the furthest US city from an interstate highway, yet there are daily flights to Chicago. A professor at Hancock’s Finlandia University lives in a cabin off the grid. Another professor at Michigan Tech can only access her house in the winter by snowshoeing. Hundreds of miles of snowmobile trails. Downhill skiing.

Cross-country skiing. In the summer, watercraft sports and fishing. Hiking and mountain biking.


After being away for seventeen years, I’m struck with the natural beauty and uniqueness of the Keweenaw. For those who call this home, Copper Island is not remote, rather it is the center of the earth. In a recent episode of Bizarre Foods, Andrew Zimmern asked a local man what would happen if the bridge went out. Without missing a beat, he said, “I guess 320 million people would be stranded.”

And that is why I set my first book, Snow Country, on Copper Island—to give the rest of America access to this beautiful land.


My character Beth Dawson, a city-girl from California, asks another transplant to the region why she made the Keweenaw her home. She says, “We came for the job at the university, but we stayed for the woods, the water, and the people.”


Beth finds the interconnectedness of the community charming, but her mother views it as “Everyone is into everyone else’s business.” The longer Beth stays, the more she learns of her mother’s past, and the more she realizes her mother’s hypocrisy in her criticism of Beth’s new boyfriend.


Snow Country also features the Finnish heritage so common to the region. Most central to Finnish culture is the sauna.


After coming home from school one day, my daughter told me that her teacher asked for a show of hands of who had a sauna at home. Every hand in the classroom was raised, and some kids raised two hands. They had both an electric sauna in the house and a wood-fired sauna outside.


In one scene in Snow Country, Beth pulls into the Johnsons’ driveway to purchase a bottle of maple syrup. There she sees Danny and another man standing behind a truck with steam rising off their bare chests. She was quite embarrassed when she realized they were having a “breather.” They were standing outside naked, cooling off from their 175-degree traditional sauna. 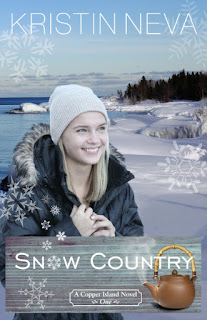 Some have asked if that was an accurate depiction of the culture. Yes, very much so. My brothers used to tell me, “Don’t look out the window. We’re taking a sauna.” They would sauna with their friends and cool off in the pond.


Copper Island, or what the old Finns called Kuparisaari, was the favorite destination for Finnish immigrants from 1870 through the early 1920s. Many Finns escaped abject poverty for the promise of fortune to work in underground mines that supplied 90% of the country’s copper.


Since Finns once made up 20% of the population in the Copper Country, they had a noticeable impact on the local culture.


The streets in Hancock are named in both English and Finnish. Many families retain Finnish names for their favorite dishes. The town celebrates Finnish festivals and Finnish culture.


The copper mines have long since closed. Once glimmering shaft houses are now rusted, empty shells or tourist attractions. Sandstone walls of roofless buildings enclose mini birch groves. These remnants are proud reminders of the golden years—or shall I say copper years.


Though incomes are low and the housing stock is old, people choose to live here. Copper Island has a natural beauty that nourishes its residents.


In my writing, I attempt to capture the essence of the culture, climate, and creation. The region almost becomes a character in itself. So much has already been written about Italians in Brooklyn, or the Irish in Boston. I hope to introduce the world to the Finns in the Keweenaw.


One Amazon reviewer wrote, “Now a visit to the Copper Country needn’t require driving hundreds of miles over snow-covered roads through deer-riddled woods. Reading Kristin Neva's Copper Island novel allows you to experience the unique culture and close community of the U.P.’s Keweenaw from the eyes of an insider. This friendly read is like a breath of fresh Lake Superior air.”


I hope to see you on Copper Island. 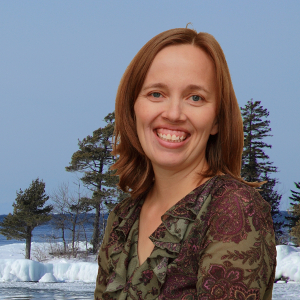