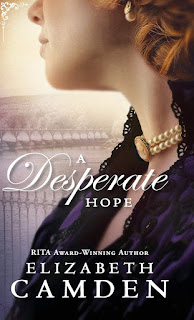 Eloise Drake grew up with a rich family, but rarely saw them as she was sent to live with a guardian at the age of eight.  She has longed for acceptance and a family her whole life.  She is also a genius with numbers.  She is one of only six female CPAs in the entire state of New York in the early 1900s.  She faces obstacles from the many men in her field, but her current boss appreciates her logical thinking.  He sends her back to the area where she grew up as a small town is to be destroyed to clear the land for a reservoir that is to flood the area.  She is hoping to avoid Alex Duval, the man she fell in love with twelve years ago.  He left the area suddenly without any explanation in the middle of their relationship.  They had plans to marry, but Eloise never heard from him again.  The people of the town don’t want to lose their homes and businesses but have exhausted their legal options.  That is, until Eloise makes a suggestion that gives them new hope.

Alex Duval is the mayor of Duval Springs.  His family has lived in this town since its founding 200 years ago.  He has fought on every front he can think of to save his town but has come up short.  Now, the state is sending a small team to evaluate the homes and businesses for their value with which the state will compensate the owners.  Alex has no idea that the accountant who will be performing the evaluations is Eloise.  Upon arrival, his old feelings come back in a rush.  He was forced to leave the area by her guardian.  Eventually, after a stint in the army, he returned and searched for Eloise but to no avail.  He wants a second chance at a future with Eloise, but is he too late?

I usually enjoy this author’s novels as they contain such interesting historical information with a unique focus on the career/life of the lead female character.  However, this story fell short for me.  I couldn’t connect with Eloise or her romance with Alex.  I didn’t like Alex with his chameleon-like character changes.  The potential for an interesting story is definitely there.  The moving of an entire town was also an interesting avenue to explore, and having Eloise be a female accountant was also interesting.  Elizabeth Camden is one of my “have to read” authors when she has a new book released.  I am still going to read her books, but this one for me just didn’t hit the mark.