The Blood of Renegades 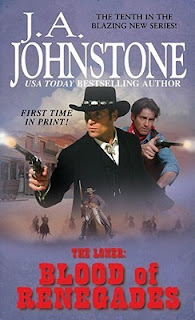 Conrad Browning, also known as Kid Morgan, is still on the trail looking for his children he recently learned existed.  Now, along with his companion, friend and servant Arturo whom he rescued from a ruthless man in a story told in an earlier novel in the series, they are quietly traveling along the same route as the railroad.  They are stopping everywhere they can, asking if anyone has seen his two children in the company of a woman named Pamela and an as yet unidentified nanny.

When bullets start flying and a lone woman is seen riding her horse as if her very life depended on it, Conrad decides to step in, hoping to discourage the men from harming her.  Conrad meets a woman named Selena who is running away from men sent to bring her back to the Mormon leader.  The men are called “avenging angels” and they are to do the bidding of the roughshod man who runs the place where the Mormons live together.

As readers enjoy the adventure, it sometimes seems like Conrad and Arturo are without options and death is staring them in the face.  However, leave it to one of these two men to fight until there is no other option and fight on the side of right so others can live free.  The ending of the book is heart-touching.  I can’t wait to read the sequel titled Crossfire to see how a cliffhanger is resolved.  The Loner series is one western or romance addicts might want to read, share and find out what other adventures await various characters in the Johnstone fictional world.

I encourage all to visit the author’s website to the booklist and pick out the next tale to enjoy!  Visit the author at https://williamjohnstonebooks.com