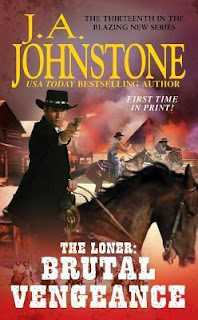 Conrad Browning is a wealthy man with a broken heart.  Now he lives like his father, always on the drift.  However, few people know him by that name.  Most know him as Kid Morgan, a new identity he assumed after losing his wife.

The tale begins by having a small town named Fire Hill under attack from the Warren Latch gang.  What they leave when they are done is death and destruction.  While Conrad is just out riding, with no particular destination in mind, the town’s posse comes across him and opens fire.  Later, we find out that Conrad is now assisting the posse, bringing in the men whose wanton destruction of Fire Hill need to face justice.  However, the members of Warren Latch’s gang aren’t going to lay down their arms.  Their leader, Warren Latch, is not going to allow anyone to walk away from his gang and if they do, they will get nothing but a bullet as a farewell.  When the head of the posse gets hurt, one of the least likely of the town’s posse is going to assume leadership, but what he leads them into is nothing but pure death.

Throughout the novel there is a constant matching of wits between the Latch gang and the posse that is after them, who won’t stop chasing them until they are caught!  If readers have read any of the Loner Series books, they will find a gripping tale of bravery, short sightedness, and hope born from death.  I couldn’t put the book down because the action was nonstop, and the suspense was off the scale.  Old West adventures are fun to read and enjoy for a few hours and when I finish a book, I turn around and grab another Johnstone western.

Visit the author’s website to see the number of books a person can choose to pick up and in their imagination return to the old west.  Also available are other tales that aren’t western but worth grabbing a copy and reading!