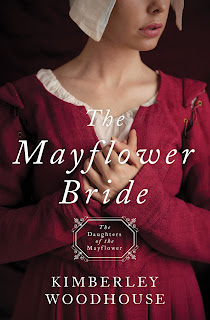 Mary Elizabeth Chapman is a young woman whose family has left England for Holland before setting out for the New World to establish a Separatist colony.  Her mother died a year before, so now it is just her father, her brother and herself traveling across the sea.  The Separatists were persecuted in England for the beliefs and long for a place where they can worship God in their own way.  Two ships are set to make the journey, but after three failed attempts to set sail one ship is left behind.  Both Separatists and Strangers (those who are not Separatists) are crowded on to the Mayflower.  All too soon many fall prey to seasickness and Mary Elizabeth spends most of the voyage taking care of them as she doesn’t suffer from the illness.  The voyage seems endless.  Food and water must be rationed, and lives are lost due to continued illness.  Mary Elizabeth grieves the lost lives and loss hits very close to home.  Will they ever make it to the New World, and if they do, will there be enough of them alive to build a colony?

William Lytton is a young man who has lived a harsh life.  He is an orphan and feels that keenly.  He was taken in by a wonderful man as a teenager and apprenticed as a carpenter.  His skill gained him a good reputation.  He is going to the New World to get a fresh start.  He is a Stranger but is impressed with the dedication of the Separatists to their faith.  His eye is caught by a pretty woman who is traveling with her brother and father.  They strike up a friendship quickly develops into a mutual admiration and romance, but Mary Elizabeth knows her father won’t give his blessing for a marriage to a Stranger.  Will doesn’t think Mary Elizabeth will accept him if she learns of his past.

I thought the author did a wonderful job of depicting life aboard ship in the 1600s.  Day after day of being confined below deck due to bad weather, the stench of unwashed bodies and vomit also confined below deck----Yuck!  I was right there on board with Mary Elizabeth, experiencing that.  The incredible fortitude of these colonists was something to see!  I so enjoyed William’s personal journey and Mary Elizabeth’s strong faith.  She learned how truly strong she was through her reliance on God to see her through her trials and hardships.  I look forward to the next book in the series, The Captured Bride, to see what exciting adventure awaits!