The Dockland Murder (The Blitz Detective #5) 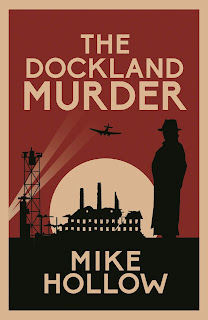 For his newest case, Inspector John Jago is headed to the shipping docks along the Thames River. A body has been found with an unusual knife sticking out of his back. The victim worked on the docks during the day and as a member of the Home Guard as a volunteer at night. The Home Guard was a voluntary force that patrolled various areas of London at night during the blackout due to the Germans constantly dropping bombs on the city. The knife is determined to be used by a particular sect of people, so Jago thinks the killing could be a matter of revenge for something the victim had done.

As Jago and his assistant, Detective Constable Cradock, begin their investigation, they question his wife, friends, and other members of the Home Guard. It is discovered that the victim was not a nice man, but there is little evidence as to who killed him. There is also a rumor about cargo stolen from the docks, as well as a series of break-ins to nearby homes with random, small items stolen. The police force in charge of the docks assures Jago that a little theft is common and tolerated, but nothing out of the ordinary has been taken. However, Jago finds stolen cargo and wonders at the dock security. There doesn’t seem to be anything tying these events together, but Jago’s gut tells him they are connected.

I like the persistence of this detective as he goes back time and again to the same people who had some sort of connection with the murder victim, hoping someone will say something different. They always do say something they hadn’t said before, putting a new slant on the investigation. Inspector Jago is such a keen observer, he uses every tidbit of information to ferret out the guilty party. I just love reading that! I realize the names of landmarks, streets and such help to give the story a realistic setting; however, I am not British and am unfamiliar with them and could do with a little less of these details. I can’t wait to read the next mystery Jago and Detective Constable Cradock face!

- June 23, 2022
Email ThisBlogThis!Share to TwitterShare to FacebookShare to Pinterest