Beyond the Desert Sands (Love on the Santa Fe #2) 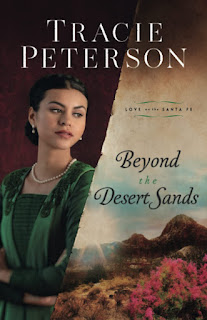 Title:  Beyond the Desert Sands (Love on the Santa Fe #2)

Love on the Santa Fe is a wonderful series where the tales are centered on the town of San Marcial, New Mexico. The first book in the series, Along the Rio Grande, tells the readers about Susanna Jenkins and how she was recently widowed, relocating to the town. As time goes on, Susanna’s life is about to get fuller as she falls in love while attempting to aid her parents as they go through a readjustment period.

In Beyond the Desert Sands, the main character is Isabella Garcia who, at first, is a young, spoiled woman who cares only about her world. Isabella’s world is upended when her family moves to San Marcial. Her heart yearns to return to the place of her youth in California. A man longs to pursue a courtship with Isabella but his past shows a man of less than reputable character. Aaron Bailey is a young man who has been asked by Isabella’s father to come work for him with the goal of taking over his responsibilities. Aaron though has longed to work for the Santa Fe with the goal of becoming upper management for the company.

Tracie Peterson gives audiences a story filled with romance, faith, mystery and suspense. At the beginning of the book, Isabella is a woman who seems devoid of respect for her parents or anyone else. When she meets Aaron Bailey, she tries to push him away and defy her father’s wishes to marry the man he believes God has chosen for her. Throughout the story I was mesmerized by the love and faith of her parents and their unending pursuit of her heart. The main premise of the story seemed to be the choice between centering life on oneself or being more of a servant to others. There are probably more themes in the book, but this is what stood out to me.

I highly recommend the works of this author who can tell a great story, include history in an interesting way, and leave this reader wanting more. In fact, the third book in this series is to be released this October titled, Under the Starry Skies, and I can’t wait to read it!

- August 17, 2022
Email ThisBlogThis!Share to TwitterShare to FacebookShare to Pinterest