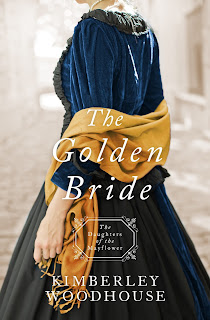 Olivia Brighton is a young widow, living with her older brother in San Francisco in 1849. Gold fever has run rampant over most of the population. Crime is everywhere. It isn’t safe for Olivia to go outside alone. There is no government, police force or fire safety in existence. Her marriage ended after only three months when her husband accidentally shot himself on the way to San Francisco to dig for gold. He spent the last of their money on gold digging supplies. Olivia tells herself she wasn’t a very good wife in her short marriage and doesn’t deserve a second chance. She has promised herself she will not marry again, especially a miner.

Joseph Sawyer owns a gold mine and is wealthy, but he keeps that a secret from most people. He has recently become a Christian thanks to Olivia’s brother, Daniel. He knows all he has is a blessing from God, and he does all he can to help and serve others. He serves on the city council as they try to get down to brass tacks about what needs to happen first in San Francisco as far as policies. His mining foreman brings to his attention the possibility of human trafficking, and Joseph goes undercover to try and rescue these people. He has never done anything like this before. Can he find these people in time?

I liked the faith element so prevalent in this story. The willingness to accept the socially unacceptable. The practiced what they preached. The way they lived showed their faith to all. They lived sacrificially so others could be served. I always like the history included in fictional accounts and the author’s note after each story. I learn something new every time, which keeps me growing as a person. I definitely learned about servanthood in this novel and to have my focus be on others not myself.

- August 04, 2022
Email ThisBlogThis!Share to TwitterShare to FacebookShare to Pinterest