The Chisholm Trail Bride (The Daughters of the Mayflower #12) 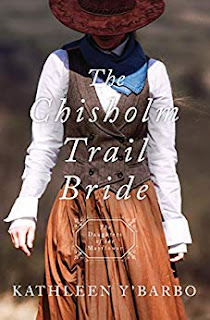 Title:  The Chisholm Trail Bride (The Daughters of the Mayflower #12)

Wyatt Creed had a rough childhood with his mother dying when he was young. His father turned to alcohol in his grief, which led to him beating Wyatt. On a cattle drive on the Chisholm Trail with his best friend, Eliza Gentry, a tragedy occurs that will change Wyatt’s and Eliza’s life. The result is that Wyatt isn’t around anymore.

Eliza Gentry wants to go to college someday and study astronomy. She loves nothing better than to lay under the stars and gaze upon their beauty. She does miss her best friend Wyatt and mourns his loss. A few years later, her attention is garnered by Ben Barnhart. He has vowed that she will be his wife no matter what. He made a similar statement years ago while accompanying Eliza and Wyatt on the same cattle drive. There are rumors that Ben might be involved in something illegal, too. Eliza realizes her heart has always belonged to Wyatt, but he isn’t a part of her life now. She refuses Ben’s offer of marriage, which leads to Ben becoming more aggressive in his pursuit of her. Her father hires a guard to keep an eye on her and something about him seems familiar.

One thing I really liked about Eliza was her continuous wonder and awe of God’s creation, especially the constellations. I found this a good reminder for myself to appreciate God’s gift of beauty in nature. I also liked the teasing nature of Eliza and Wyatt’s relationship. The author did a good job of painting Ben as the “bad guy” with his sneaky and underhanded ways. I absolutely enjoyed all twelve books in this series and would recommend them all. They can be read in any order as the characters don’t carry over from novel to novel. The time period advances with each novel, however. I hope that the publisher will do another project like this as it was such fun reading about different time periods in history.

- December 01, 2022
Email ThisBlogThis!Share to TwitterShare to FacebookShare to Pinterest